Higano (, Higano?) is an Impurity and the ninth Basara. His risk rank was S. 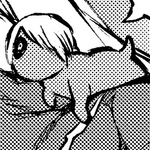 Higano has light gray, shoulder-length hair and dark skin. His right eye is completely black with a yellow pupil while his golden left eye is always closed. A long crack runs across his face, starting at the top right of his face and ending at the bottom left. Higano wears a white Meiji-era military uniform with a yellow sash from his left shoulder to right waist. He also has the kuji-kiri on his chest.

Higano seems to be calm. Just like the other Basara, he has no mercy for humans. He is very loyal to Hijirimaru, to the point that he sacrifices himself to give Hijirimaru his power.

Higano always say what is on his mind when he talks to someone.

Higano does not care about the power he can gain from the humans once they are killed. He prefers letting Hijirimaru kill them and take the powers.

As a Basara, Higano has lived over 100 years and he is over 3 times stronger than a Heavenly Commander. His spells and powers are lightning based. He also specializes in speed.