Episode 1
Impurity (ケガレ, Kegare?) are the monsters that reside in Magano and break into the human world to abduct and kill humans. They are the main enemies of the Exorcists.

It is unknown when and where they come into existence. It is said that Impurities have existed since the beginning of time. Furthermore, it is said that they are born from the depths of people's sins and karma.

While they vary greatly in overall appearance and size, Impurities have dark skin and a kuji-kiri on their torsos.

Deigan (泥眼, Deigan?, lit."Mud Eyes") is the weakest type of impurity and the most usual. They have small bodies, weak perception and slow movements. An average adult male exorcist (Ryogo Nagitsuji as standard) can take down ten of them at once. Their risk levels are (from low to high): D and +D.[1]

Hannya (般若, Hannya?) are bigger than Deigans but much more powerful, it can can cause trouble to average exorcist in Mainland. Their risk levels are (from low to high): C, +C and CC. Hannya refers to a type of monster of Japanese folklore, originally mean "wisdom" in Buddism

Ja (蛇, Ja?, lit."Snake") Stronger and larger than Hannyas, one takes about ten average exorcists to be taken down. However, at Tsuchimikado Island they are considered as low level ones. Their appearance is influenced by the people they killed. Their risk levels are (from low to high): B, +B and BB.

Shinja (真蛇, Shinja?, lit."True Snake") have human speech and high perception. They require high level exorcist teams or Twelve Guardian class power to be dealt with. As the impurities also prey on each other, this kind of impurity is rare. Their strength is about the power of 50 average exorcists. Impurities start to have genders at this rank. Their risk levels are (from low to high): A, +A and AA.

Once a Shinja absorbs enough spell power, it evolves into a Basara (婆娑羅, Basara?), a human like impurity that can speak human language. There are only a few of them and their power and strength is leagues above that of most impurities and exorcists. Same as exorcists, they can also use enchanted gears. Their rank is only determined by the basara's age instead of possible threat. Their strength is at least the power of 100 average exorcists. Their risk levels are (from low to high): S, +S and SS.

Exorcists and humans that are corrupted by a spell are called Namanari (生成, Namanari?, lit."Product") or fallen impurities. These impurities are much stronger than normal impurities.Their appearance is much like the normal impurities but their kuji-kiri marks are green. Some of the victims were the Hinatsuki Dormitory students, Mayura Otomi that was later purified by Benio and Rokuro. Their risk levels are ex S or ex A.

After the King of Impurities appeared, the human beings being exposed to its miasma were turned into Impurity-like beings, increasing their size and getting dark skin and white eyes. They also acquired a violent behaviour, and added to an increased strength, they were able to kill humans in one blow or attack in groups to consume them.[2]

Tenma Unomiya declared that they could not be categorized as impurities nor cases of impurity corruption, but as ancestors of Impurities.[3]

As opposed to present impurities, these ancestors lacked a kuji-kiri on their bodies.

This is a list for all named Impurities appeared within the series[4]: 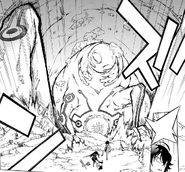