Yamato (山門, Yamato?) is a Basara that hails from the Outcast Valley village. 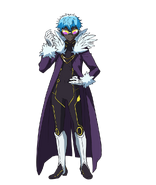 Yamato appearance in the Anime

Yamato is shown to look like a physically fit, teenage year looking young man wearing a skin tight sleeveless black body suit only covering his torso until his thighs.

After rampaging around the Island, Yamato was shown to have found the same feathered coat jacket and shades he wears in the Anime and adopted them into his look.

Yamato has the appearance of a young man, he wears yellow and purple sunglasses as well a purple outfit which comes with a cape, that covers most of of his body.

Yamato has a rather flamboyant personality which fits his appearance.

He loves Kegare as they can help him in a battle and be useful combat uses.

Even though he seems to be loyal to Kuranashi, he declares he will be ready to rule even Kuranashi once he absorbs the power of all Twelve Guardians.

He is one of the new Basara to have been created.

During the mass wide invasion of Impurities at Tsuchimikado Island, Yamato appeared through one of the portals Sakanashi prepared with Beru. Yamato and Beru in particular would enter into the real world right at Tsuchimikado House's Manor and right in front of Arimori Tsuchimikado and his two retainers, who two would then proceed to attack them.

Yamato is killed when fighting Kankuro Mitosaka and Ujii Kengo of Twelve Heavenly Commanders after underestimating their abilities.