Yuto Ijika (, Ijika Yūto?) was the older twin brother of Benio Adashino. He was also an old friend turned enemy of Rokuro Enmado, and the mastermind behind the Hiinatsuki Tragedy.

Yuto is a young man with blue hair that is kept in a bowl cut hairstyle, he has gold colored eyes and wears an eye patch over his left eye. He is seen wearing a white uniform with dark blue designs on the sides of the sleeves and on the zipper.

Before he had an eye patch, he had blue eyes matching the color of his hair. While experimenting with exorcist spells, he was forced to give up his eye as payment.

Two years later, his appearance has not changed except he has gotten taller with a stronger build.

When he was younger, Yuto appeared as an antisocial kid who was confident in his own power, who saw anyone else in the Hiinatsuki dorm as low level exorcists. To Benio, he was an example as older brother and had a strong sense of justice. This was later revealed to be a cover for him in order to reach his goal.

In reality, he remains very confident in his own power and he feels nothing for Benio nor Rokuro and didn't hesitate to kill them if he had the occasion, he is cruel and fearless in front of his enemies. He is ruthless and shows no remorse in his actions and even belittled Benio by insulting their late parents who sacrifice themselves to save her while calling her pathetic. However, he was surprised by Benio standing up to him and actually managing to wound him.

He also loves showing off his strength and whenever he has a moment of weakness, he makes it appear like it is a bluff in order to keep his strong image. Yuto enjoys being an exorcist, and seeks to be the best as he has shown that he will do anything to achieve it, not even minding sacrificing countless people to become the strongest exorcist. He dislikes weak opponents, as seen when he casually slaughtered several exorcists.

While he may not feel much attachment to his family, Yuto has shown to have many similarities to them such as his love for Ohagi and his desire to get stronger as an exorcist.

It is later revealed that he was injured after falling out from a hill and he began to suffer from horrific visions that completely warped his personality into that of nihilistic being he is now. It is also shown that he does care for his family and puts up a facade of not caring for them, since they end up dying.

Born Yuto Adashino, with his twin sister following him, he was raised and trained in Adashino House, one of the 64 distinguished houses of Tsuchimikado Island. His family was a loving one, with Yuto caring for them in return but one day Yuto was injured. While unconscious, he experienced warped visions that changed his way of thinking to match that of psychopathic and grew to despise his family, while pretending to still be a good family member.

After his parents was killed by Kamui at age 8, he was adopted to his father's birth family, as the Adashino House's head can only be female, while his younger twin sister Benio went to live with their Adashino relatives in Mainland.

During the time before he came to Hiinatsuki Dormitory, he adopted the name Ijika Yuto and began to wear a eye patch after sacrificing something precious to use the dark arts. He later volunteered to be sent to the Hiinatsuki Dormitory. At Hiinatsuki, he seemed to not care about everyone, only focused on his own development. However, Rokuro did arise his interest and the two became rival and friends.

In order to advance with his goals, he used all the students in Hiinatsuki Dormitory as lab mice, all other died, but Rokuro turned to one satisfying object.

In both the manga and anime, Rokuro and Yuto were childhood friends living at Hiinatsuki Dorm. They were considered to be the exorcists who ends the war with the Impurities. On the day of the Hiinatsuki Tragedy, he and Rokuro fought it out resulting in Rokuro's corruption and Yuto's disappearance.

Rokuro is informed by Seigen Amawaka that Benio is the sister of Yuto. Rokuro is forced to confess to Benio about the truth behind the tragedy. Yuto then makes his presence known and casually greets his old friend who is shocked by his survival.

In the anime, Rokuro is shown to have lost his temper and attacked Yuto relentlessly, while in the manga, Mayura was corrupted before Yuto met up with Rokuro. Considering that the Furu no Koto drains their spell power, Rokuro couldn't put up much of a fight in the manga. In the anime, Mayura was corrupted before Yuto's second meeting with Rokuro. In both the anime and manga, Yuto duels with his former teacher Seigen Amawaka, he states their battle will be his declaration of war on the Exorcists. When Seigen uses his full enchanted gear, Yuto stands ready for the battle but after Seigen attacks he is unfazed by the strike. He cries at how sad it is that he became stronger than his teacher after two years before retaliating against Seigen seriously wounding him and destroying part of his arm in the process.

Yuto then asks Rokuro to side with him in order to complete his ambition and to meet him at their old dormitory. Rokuro and Benio have been training to fight Yuto (they still have to give each other a signal to activate Resonance).

In both the manga and anime, Kamui turned Benio into a Fallen Impurity and she also proved that she could utilize her power enough to land multiple hits on Yuto leaving him bloodied and battered. Later, Rokuro healed himself somehow. In the manga, Rokuro's spiritual guardian Abe no Seimei, spiritually connected with him, resulting in Rokuro temporarily unlocking his "Great Yang" form. In the anime, this was cut out and the transformation only lasted long enough to heal Rokuro's wounds. Yuto was forced to use his entire Kegare form but was defeated, however it was a hollow victory as he escaped before telling Benio, "I'm going to the island".

Two years later, he stands among the bodies of fallen exorcists before he believes that he faintly felt Rokuro's presence and wonders how he long he has to wait for him.

When Tenma Unomiya telepathically contacts Rokuro, Yuto manages to detect it before the former cuts off the connection after realizing this. Now aware of Rokuro's presence on the island, Yuto screams out in joy as he manically laughs at the thought of fighting against Rokuro again.

Before the exorcists could carry out the "Yuto Suppression Operation" mission, he and the Basaras united and launched a surprise attack to reach the entrance of Magano, aiming to annihilate all the exorcists.

Later on, Yuto is confronted by Tenma and they talk for a while with Yuto being interested in facing the supposed strongest exorcist. They battle and Yuto seemingly prepares to get the upperhand until Tenma breaks away and Rokuro appears. Excited at seeing his former friend, Yuto greets him and they trade punches with both expressing joy at the others new strength. Yuto stands ready as both Tenma and Rokuro prepare to engage him. The trio start their fight with Yuto holding off some of his enemies' attacks before Rokuro uses his Kegare arm, which Yuto notes has changed before he acknowledges the strength Rokuro has gained when he fires a barrage of attacks. Yuto sends an attack at Rokuro that is intercepted by Tenma, whose powers interest him. The fight continues with Yuto starting to enjoy it while using his own enchantments against Tenma and taunts him on dodging before he sees Rokuro uses his Shikigami and notes on it being Benio's old drawing. When Rokuro uses a powerful attack, Yuto is forced to partially transform to block it and is frustrated that he was forced to do so. Yuto watches as Rokuro and Tenma decide to get serious while unleashing their full power. They then attack him, with Yuto being pushed back and acknowledging they are stronger than before and he is unable to properly defend himself. However, a tag team attack forces him to use his entire Kegare form to hold it off and expresses anger that he was forced to transform. Yuto is flummoxed when Tenma and Rokuro team up to do a Resonance, with him questioning how it was possible. Yuto is hit by the attack and loses his arm, while angrily demanding to know the possibility of the attack.

Yuto is very skilled in exorcism having been a skilled prodigy at a young age. He studied forbidden exorcism in order to increase his power and was successful as his new abilities allowed him to greatly wound and soon defeat Seigen Amawaka, who at the time was still a member of the Twelve Guardians and the third strongest. Yuto even said he couldn't believe he was able to become stronger than his old teacher in a short time. Two years later, Yuto's threat level increased to that of a Basara and its said Rokuro would have to join the house of one of the Twelve Guardians to fight Yuto again. Single-handedly, Yuto was able to take down several trained exorcists on Tsuchimikado Island and emerge without a scratch. A true glimpse of his increased strength is when Yuto clashed evenly with both Tenma Unomiya, the strongest exorcist in the Twelve Guardians and Rokuro while holding his own. 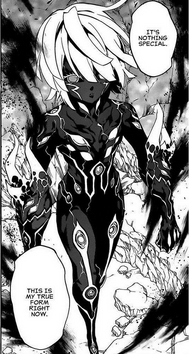 Kegare Form: Being an Exorcist that has Kegare powers, Yuto is able to use Enchanted Gears to help him combat Impurities when fighting in Magano. He was able to master his power to the extent that his enchanted Gear takes the form of a rocky Blue arm similar to that of an impurity. Yuto is also able to perform a full-body enchantment akin to the Twelve Commanders Celestial Gear Equip, dubbed Gentai by Tenma Unomiya.